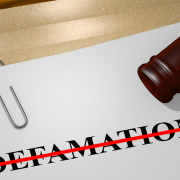 Cleveland, OH – An Ohio Court ordered Maple Heights, Ohio Mayor Jeffery Lansky and his attorney to pay $9,395 in attorney’s fees and costs to internet critics they sued to silence.

In 2014, Lansky and his attorney, Brent English, filed a lawsuit for defamation and infliction of emotional distress, demanding “an amount in excess of $25,000” from Bill and Lynde Brownlee, husband and wife, after they questioned Lansky’s job performance on their blog, Maple Heights News

The 1851 Center took up the case and the Cuyahoga County Court of Common Pleas ruled for the family in late 2015. The court explained that “a primary purpose of the First Amendment is to encourage self-government by permitting comment and criticism of those charged with its leadership.”

“Those who would use the courts to silence their political opponents should take this ruling seriously,” explained Maurice Thompson, Executive Director of the 1851 Center.

“When criticizing public officials, Ohioans should not be bullied into silence for fear of an expensive lawsuit. Often, the possibility of an economic penalty such as this is the only means of persuading Ohio governments and local officials to respect constitutional rights.”

The Brownlees had written a short web article in the summer of 2014 questioning whether the Mayor had kept all of his campaign promises, and further questioning his tax and spending policies. The article strictly addressed the Mayor’s policies, and did not use insulting or harsh language. One prominent undercurrent to the case concerned whether political comments on citizen websites would be entitled to the same level of protection as mainstream news commentary.

Lansky v. Brownlee was litigated by the 1851 Center in cooperation with attorneys David Tryon and Brodie Butland of the law firm of Porter Wright in Cleveland, Ohio.

Private ethane pipeline to Canada is not a “public use” or “public necessity,” as required by Ohio Constitution

The ruling protects the property rights of dozens of Ohioans represented by the 1851 Center for Constitutional Law and others along the pipeline route. However, given the escalation in private pipeline construction throughout Ohio and the nation, the decision is anticipated to have impact well beyond just the immediate parties or the Utopia Pipeline.

In April 2016, Texas pipeline corporation Kinder Morgan, using an arcane Ohio statute, sued the farmers in an attempt to forcibly take their land for the benefit of its private ethane pipeline to Canada. In moving to dismiss the case, the 1851 Center argued that the Utopia Pipeline is not a “public use,” as required by the Ohio Constitution. The 1851 Center explained that the pipeline is, for the sole benefit of one private Canadian corporation, shipping ethane (a by-product of fracking) underground throughout Ohio directly to that corporation’s Canadian factory, where the ethane will be used to manufacture plastic products such as water bottles.

The 1851 Center further argued that taking Ohioans’ land was not a “public necessity,” since the pipeline’s route was not set it stone by government, giving Kinder Morgan the freedom (unlike natural gas pipelines) to build its pipeline around objecting landowners.

In a decision extolling private property rights under the Ohio Constitution, Judge Robert Pollex of the Wood County Court of Common Pleas agreed. The Court explained why such attempted land-grabs by large private corporations, particularly those that are not public utilities or otherwise directly providing services to Ohioans, cannot be sustained:

“The Court’s ruling is a substantial victory for private property rights across Ohio, but above all else, this outcome safeguards the dignity and respect to which every Ohioan is entitled,” explained Maurice Thompson, Executive Director of the 1851 Center.

“While we fully support the continued development of oil and gas reserves in eastern Ohio, profit margins related to private efforts should not be inflated at the expense of Ohioans’ rights. Just like churches, gas stations, supermarkets, and other important private endeavors, pipeline construction can and must move forward without using the governmental power of eminent domain to redistribute land from average Ohioans to wealthy politically-connected cronies and elites.”

The Court’s ruling draws a distinction between takings for pipelines facilitating home heating or energy independence and pipelines for purely private commercial interests. While public utilities may exercise eminent domain to provide service to Ohioans’ homes, and certain oil and gas pipelines may even possess eminent domain authority, the Utopia Pipeline remains submerged through the entire state, and provides no service to Ohioans. The ruling will not prevent governments or public utilities from acquiring land for legitimately public pipelines.

The ruling is also an important reminder that Ohioans enjoy greater property rights than those protected by the federal constitution, due to a stringent state constitution.

The 1851 Center’s position was supported by an amicus brief from the Ohio Farm Bureau, as well as the efforts of the northwest Ohio law firm of Mayle, Ray & Mayle, LLC.