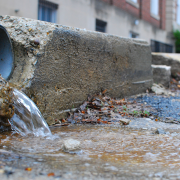 Northeast Ohio Sewer District tax on “impervious surfaces” is without legislative authorization, and is a property tax without the required voter approval

Columbus, OH – The 1851 Center for Constitutional Law submitted to the Ohio Supreme Court its Merit Brief asserting that the Northeast Ohio Regional Sewer District, a Cleveland-Akron area administrative agency, lacks authority to regulate property in response to rainwater, which is not sewage, and even if it has such authority, may not impose a stormwater-related tax without a vote.

The Sewer District seeks to levy a tax on “impervious surfaces” on hundreds of thousands of Northeast Ohio residential and business property owners. These surfaces include roofs, patios, driveways, and parking lots, and are taxes levied based upon the square footage of each. The District maintains that this is a means of addressing rain-related erosion, run-off, and flooding.

Although such districts’ authorities often claim that settlement agreements with the federal EPA mandate such programs, such settlements mandate no particular course of action and do not permit agencies to transgress the Ohio Constitution.

Joining the 1851 Center on the Brief is the Ohio Real Estate Investors Association. Objecting to the taxes and regulations are several Cleveland-area municipalities, as well as numerous property-owner and business organizations, including the Ohio Council of Retail Merchants, Greater Cleveland Association of Building Owners and Managers, and the Cleveland Automobile Dealers Association.

The 1851 Center’s amicus brief argues that a sewer district, as an administrative agency of defined and limited powers, has no authority to impose taxes and regulations related to rainwater falling from the sky, i.e. something other than sewage. The brief further maintains that even if the agency had power to address rainwater, it may not tax property owners because the Ohio Constitution prohibits the raising of property taxes without voter approval through a tax levy election.

The 1851 Center’s brief asserts the following:

“Agencies like this are entirely unaccountable to the public, and this case stands for the principles that such agencies cannot take control of every facet of our lives, down to rainwater and the size of our patios, while taxing development in a manner that punishes and discourages it, with no regard to economic factors or public approval,” said Maurice Thompson, Executive Director of the 1851 Center for Constitutional Law.

“The Sewer District’s tax on impervious surfaces, including nearly every patio, rooftop, and driveway in Northeast Ohio, bares a far closer resemblance to sewage than does rainwater, and the District must consider less invasive methods to dealing with rain, which we have managed to deal with without taxation for all of human civilization.”

Oral arguments will likely take place in the fall.