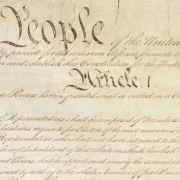 Columbus, OH – The 1851 Center for Constitutional Law moved in federal court to immediately enjoin Ohio cities, and the Cities of Bedford and Oakwood in particular, from enforcing “point of sale” and “presale” programs that require citizens to endure and pass arbitrary and warrantless government inspections before they can sell their homes to even the most informed and willing buyers.

The legal action against Bedford is filed on behalf of area landlord Ken Pund, who is forbidden from selling to his daughter a home that he owns and she already resides in, and John Diezic, who was prohibited from selling his Bedford home due to minor cracks in the asphalt of his driveway. In Oakwood, Plaintiff Jason Thompson was forced to pay for and undergo an inspection simply after making an alteration to the title of his property.

In each case, the City threatened to criminally prosecute and even imprison these homeowners if they sold their homes without first submitting to and passing city inspections.

Both the United States and Ohio Supreme Court have invalidated warrantless inspections of houses, absent consent or an emergency. Nevertheless, Ohio cities have vigorously sought to collect inspection fees and impose fines, and the point of sale inspection requirements are the lynchpin to this revenue stream – – homeowners, irrespective of whether they want or need the inspection, pay a $100 fee to fund the inspections, and then additional fees for “follow-up” inspections.

The lawsuit seeks to restore both Ohio homeowners’ and small business owners’ freedom from warrantless searches without probable cause. In doing so, the 1851 Center’s Complaint explains the following:

“Local government agents do not have unlimited authority to force entry into Ohioans’ homes or businesses. To the contrary ‘houses’ are one of the types of property specifically mentioned by the Fourth Amendment; and Ohioans have a moral and constitutional right to exclude others, even government agents, from their property. Entry requires either a warrant or an emergency, and neither is present with respect to these suspicionless inspections,” said Maurice Thompson, Executive Director of the 1851 Center.

“The right to own property in Ohio has little value if local governments can continuously chip away at one’s right to actually make use of that property, requiring government permission slips for basic arrangements such as the sale of one’s home to a willing buyer.”

In Bedford, the City maintains the power to block sales on account of “architectural style and detail,” “color,” and lack of “orderly appearance.” In Oakwood, the City concedes “the inspection will seldom, if ever, reveal latent defects or violations of the Property Maintenance Code which are not readily apparent. Neither should owners nor prospective owners or occupants rely entirely upon our inspection regarding the house or accessory structures or fixtures.”