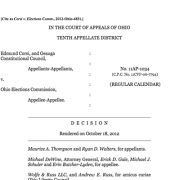 In an apparent retaliatory action against an outspoken critic, the Geauga County Board of Elections charged independent blogger Ed Corsi with violating campaign finance laws. The elections board forwarded a complaint to the Ohio Elections Commission (OEC), where Corsi faces fines of up to $1,000 a day.

Corsi’s blog, http://www.geaugaconstitutionalcouncil.org, is critical of local government and political officials, including Geauga County Board of Elections Member Edward Ryder. Ryder is chairman of the Geauga County Republican Party. Specifically, Corsi publishes a politically “most unwanted list” critical of several officials he refers to as “RINOs” (Republicans in Name Only). Corsi’s website and his blogger pseudonym, “Geauga Constitutional Council (GCC)”, are not registered political organizations. They do not coordinate with political campaigns. And, Corsi personally pays for all costs associated with the website and subsequent printed material.

Corsi, political blogger, is being charged with failing to register with the state as a political action committee prior to criticizing local government officials.

“This case has the potential to severely limit free speech in Ohio,” said 1851 Center Executive Director Maurice Thompson. “Should independent bloggers in Ohio be subject to registration, political disclosure laws, and fines simply because they discuss Ohio politics, and are critical of certain politicians? The Constitution says otherwise.”

“When applied to Corsi’s activities, the law violates the First Amendment right to anonymous political speech,” said Thompson. “It places an impermissible prior restraint on core political speech. And, it applies an overbroad regulation and/or prohibition on political speech that is not express advocacy.”

August 3, 2010: Geauga County Board of Elections Files Complaint Against Critic

The 1851 Center for Constitutional Law and The Rutherford Institute, non-profit legal advocacy firms, filed arguments with the Ohio Elections Commission (OEC)  on behalf of Corsi. The legal organizations argue the elections board improperly and unconstitutionally applied campaign finance law to Corsi’s activities. Further, the board’s complaint infringes upon Corsi’s First Amendment right to criticize his government.

The elections board based their complaint on O.R.C. 3517.20(A)(2), which states that no entity shall publish against a candidate without full disclosure of their name and address; this disclosure must appear in a “conspicuous place.” The 1851 Center believes this action overreaches the application of the law and violates the freedom of alternative media, such as independent political bloggers.

On April 28, the 1851 Center argued the case of Ed Corsi to the Ohio Elections Commission. The OEC concluded that because some friends and allies assisted Corsi in handing out pamphlets, the efforts of these individuals rendered them a “Political Action Committee,” even though they spent no funds in supporting or opposing candidates, and coordinated with no campaigns.  Any Ohioans designated as a PAC must register with the state prior to engaging in political speech, and must comply with onerous reporting requirements.

The 1851 Center argues the law under which Corsi is being charged is not only vague in language, but violates his right to speak anonymously and is an unconstitutional prior restraint on core political speech. Meanwhile, Ohio’s Constitution contains broad protections for speech and press that afford new media the same protections as the mainstream press .

On June 24, the 1851 Center filed a notice of appeal in the case of Ed Corsi.  The 1851 Center argues that the law under which Corsi is being charged is not only vague in language, but violates his right to speak anonymously, is an unconstitutional prior restraint on core political speech, and violates freedom of association.  Meanwhile, Ohio’s Constitution contains broad protections for speech and press that afford new media the same protections as the mainstream press.

“The right to criticize one’s government cannot be conditioned on that government’s prior permission,” according to 1851 Center Director Maurice Thompson.  “Under the Ohio Elections Commission’s decision, every tea party group, every protest, and every signature-gathering or pamphleteering effort in the state is a Political Action Committee that must register with the state or face $1,000 fines, and even apolitical associations run this risk, if associating with those engaged in political speech.”  Said Thompson, “This ruling isn’t an aberration – – it represents the outward limit of a corrupt philosophy that prohibits the average Ohioan from fully engaging in political debates.”

The 1851 Center filed a Merit Brief with the Franklin County Common Pleas Court, arguing that reporting and disclosure requirements violate the free speech rights of internet bloggers.  The brief can be found here.

The 1851 Center disputes the state’s assertion that any combination of two or more persons discussing political ideas constitutes a PAC, which must be registered with the state. To read the Center’s Reply Brief click here.

May 16, 2012: Oral Arguments Will Occur at the Court of Appeals in the 10th District of Ohio

Columbus, OH – Supporters today will deliver more than 546,000 signatures to the Ohio Secretary of State to place the Ohio Health Care Freedom Amendment on the November ballot.   The amendment would add a 21st Section to Ohio’s Bill of Rights “to preserve the freedom of Ohioans to choose their health care and health care coverage.”
END_OF_DOCUMENT_TOKEN_TO_BE_REPLACED