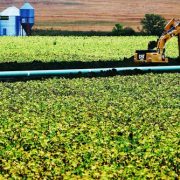 15 families unite and move to dismiss corporation’s case attempting to take their land through eminent domain.

The action is filed on behalf of 15 families in eastern Wood County who have owned and farmed the disputed land for generations, and oppose turning it over for the Utopia Pipeline, a private ethane pipeline running underground to a Canadian plastics factory.

Kinder Morgan, a Texas-based corporation amongst the world’s largest pipeline companies, has used the threat of eminent domain as leverage to force Ohioans to sell it desirable land to construct the Utopia across northern Ohio. It claims that it — by itself and without government approval — can take Ohioans’ homes and land pursuant to an arcane Ohio statute now experiencing a revival due to energy development in eastern Ohio.

However, in its Motion for Judgment on the Pleadings, the 1851 Center explains that taking private property from Ohioans and giving to private businesses simply to enhance their profit margins, whether initiated by the state or the private party itself, violates the Ohio Constitution:

“This is redistribution of wealth of the worst sort: taking property from regular Ohioans and giving it to a billion-dollar Texas corporation for its own benefit, under the false pretense of progress,” explained 1851 Center Executive Director Maurice Thompson. “The abuse along the Utopia Pipeline is a prime example of what can happen when legislators attempt to auction off Ohioans’ property rights to the highest bidder. Ultimately, the Ohio Constitution prevents this abuse, and we will prevail in court. But statutes inviting this sort of behavior should be amended or repealed.”

“And while we fully support the continued development of oil and gas reserves in eastern Ohio,” continued Thompson, “the very thing that makes private enterprise possible is respect for private property rights – – the Ohio Constitution does not enable private parties to take Ohioans homes and land, simply to improve their own profit margins.”

The 1851 Center draws a distinction between takings for pipelines facilitating home heating or energy independence and pipelines for purely private commercial interests. While public utilities may exercise eminent domain to provide service to Ohioans homes, and certain oil and gas pipelines may even possess eminent domain authority, the Utopia Pipeline remains submerged through the entire state, and provides no service to Ohioans.

“At minimum, Kinder Morgan is using the false threat of eminent domain to intimidate Ohio property owners into accepting below-market settlements for their land,” added Thompson. “Ohioans should be aware of this ploy.”