Our clients receive free legal representation thanks to the generosity of our donors. If you support our efforts to advance liberty and limit government, please consider making a tax-deductible donation to the 1851 Center for Constitutional Law. Use our Paypal donation button below (no Paypal account is needed to donate). 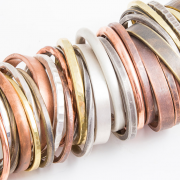 Act regulates business in response to constitutionally-protected advertising, and prohibits legitimate purchases of gold and silver

The ruling, made by Judge Watson of the Columbus division of the Southern District of Ohio, paves the way for Ohio businesses, most prominently coin dealers, to resume purchases of items containing gold and silver content, and in particular, to resume advertising their interest in purchasing inventory consisting of precious metals, free from concern over confiscatory prosecution, fines and regulations.

The 1851 Center for Constitutional Law took up the coin dealers’ case and challenged the state law after the Ohio Department of Commerce threatened to shut down Liberty Coins, of Delaware, Ohio, if it refused to pay considerable fines and obtain a government license to advertise its business.

The lawsuit had sought recognition that the First Amendment applies to and protects “commercial speech,” such as coin dealers’ advertising, and that the Act’s prohibition of advertising by coin dealers was not a means of reducing gold and silver-related theft.

The lawsuit had also made claims asserting that requirements that business owners demonstrate that they have “good character,” “sufficient reputation,” “sufficient financial responsibility,” and “sufficient experience” prior to being permitted to run their businesses were unconstitutionally vague; and that the Act’s authorization of warrantless searches of business owners’ property and records at any time without notice violated their Fourth Amendment rights.

In his 28 page decision, Judge Watson, explaining that “the Act only prohibits the unlicensed buying of precious metals when commercial speech is involved,” emphasized that “a broad injunction completely prohibiting enforcement of the licensing provision is warranted.”

The order, an across-the-board rebuke to Ohio’s regulations and the cavalier enforcement tactics the Ohio Department of Commerce has against Ohio’s small businesses over the past year, concluded as follows:

“We are just trying to make it safe for small businesses to operate in Ohio – – a mission that we wish our state government would share, rather than thwart,” said Maurice Thompson, Executive Director of the 1851 Center. “This Act and those enforcing it treat small businesses who make gold and silver available as public utilities at best, and criminals at worst, irrespective of whether they have done harm.”

Heightened enforcement of the PMDA by the Department of Commerce, under the control of the Kasich Administration, comes in response to accelerated lobbying and financial contributions to candidates by the pawn brokers industry, which is exempt from the regulations, and a direct competitor of those who are subject to the Act. The enforcement, which would have put many coin dealers out of business, also comes at a time of rising precious metals prices, where an increasing number of Ohioans seek to use gold and silver to protect their savings against potential inflation caused by federal government increases in the money supply.

Thompson added “the state misguidedly seeks to advance its mission of ‘preventing theft and resale of precious metals’ through gag orders, warrantless searches, and criminalization of innocent small businesses. Fortunately, the First Amendment allows us to protect Ohioans’ rights to engage in truthful promotion of their businesses.” 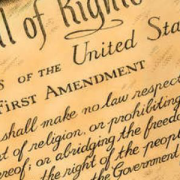 Columbus, OH – The 1851 Center for Constitutional Law today applied to the Supreme Court of Ohio for jurisdiction over a case challenging the nation’s strictest Political Action Committee regulations.

The legal action is filed on behalf of Edmund Corsi, a Cleveland-area blogger who faces prosecution after blogging about state and local political issues, authoring a pamphlet critical of local politicians, and hosting an informal political discussion group. The state contends that Ohio’s PAC laws required Mr. Corsi to first register with the state and hire a treasurer, and then disclose his home address on his pamphlet and blog, and that by failing to do so, Corsi is subject to criminal penalties and civil fines. Mr. Corsi was referred for prosecution by one of the politicians he criticized – – Geauga County Republican Party chairman Edward Ryder.

In fact, the Court has already once struck down Ohio’s Political Action Committee regulation, in McIntyre v. Ohio Elections Commission in 1995. There, the Court chastised Ohio courts and the OEC for upholding the regulations after state officials attempted to prosecute a senior citizen for failing to include a “disclaimer” on her homemade flyer advocating against a Westerville property tax increase. Nevertheless, the Ohio Elections Commission maintains that the re-written regulations still require groups of two or more Ohioans who communicate political thoughts to first register as a Political Action Committee, and thereby submit to reporting, disclaimer, and disclosure requirements when communicating.

This case will mark the Ohio Supreme Court’s first opportunity to analyze the re-written PAC regulations, as well as the Court’s first opportunity to consider the effect of the U.S. Supreme Court’s landmark Citizens United decision on Ohio’s campaign finance regulations. There, of potential importance to Mr. Corsi’s case, the Court explained that “the First Amendment does not permit laws that force speakers to retain a campaign finance attorney * * * before discussing the most salient points of our day” (At Mr. Corsi’s hearng, the OEC Chairman advised Mr. Corsi to engage a campaign finance attorney if he wished to continue blogging about state and local public policies).

The 1851 Center’s Motion for Jurisdiction asserts the following:

“Ohio’s PAC regulations have long been considered the most oppressive in the nation,” said Maurice Thompson, Executive Director of the 1851 Center. “It would be wise for our Court to hold that the First Amendment does not allow agency bureaucrats and political opponents to use PAC regulations to silence the speech of those who criticize government, using the loss of privacy and expensive reporting requirements of PAC regulations as leverage to intimidate and threaten those expressing differing views, as has been done here.”

The case is particularly significant for opponents of local tax levies and “tea party” groups, many of whom are likely to be characterized as Political Action Committees, if the Ohio Election Commission’s ruling is not overturned.

Ohio’s regulations are notable because they are the nation’s only PAC regulations lacking what is commonly referred to as a “monetary trigger”: Ohioans can be forced to register as PACs even if they neither expect to or actually give money to or take money from political candidates or campaigns, and otherwise spend no money on politics.