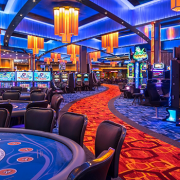 Columbus, OH – The 1851 Center for Constitutional Law today emphasized to Ohio’s state senators and representatives that “priority” legislation to shut down Ohio’s 800-plus internet cafes is inconsistent with principles of limited government, unconstitutional, and dangerous to Ohio’s economic well-being.

House Bill 7, introduced on February 8, is designed to regulate Ohio internet cafes out of existence. The legislation comes in swift response to the casino industry’s public expression of a strong desire “to prohibit internet sweepstakes cafes in Ohio,” which are “posing a threat to existing state-licensed businesses.”

In a comprehensive analysis released today “Placing a Dangerous Bet: Banning Internet Cafes to Benefit Casinos is Unconstitutional and Inadvisable,” the 1851 Center for Constitutional Law explains that the legislation has no place on the “conservative” agenda, much less prioritized as a “first legislative initiative” by House Republican leadership. Specifically, the report asserts:

(2) The newfound interest in banning rather than regulating these business coincides with casino lobbying for the same.

(3) The ban violates the spirit, if not the letter, of Ohio’s anti-cronyism provisions and property rights protections.

(4) The current text of House Bill 7 violates the free speech protections of the state and federal constitutions.

(5) Assigning such a high priority to legislation picking winners and losers amongst business competitors sends a dangerous message to the business community.

The report further notes that the internet cafe business model does not constitute gambling, is not prohibited by the Ohio Constitution’s “lottery” provision, and the only plausible justification for shutting down rather than licensing and regulating internet cafes is to advance the private financial interest of the Ohio’s new casinos.

“House Republicans are misguided in fast-tracking unconstitutional legislation that destroys over 800 harmless small businesses and 16,000 jobs, particularly while Ohioans continue to be burdened by overspending, over-taxation, and over-regulation at the state level,” said Maurice Thompson, Executive Director of the 1851 Center. “This legislation sets a dangerous precedent by signaling to large businesses that they can use political influence to shut down their less influential competitors.”

“While internet cafes do not pursue a universally-adored business model, the property rights of ‘unpopular’ businesses must be afforded the same respect as those of popular businesses,” added Thompson.