The case was won by the 1851 Center for Constitutional Law on behalf of the Theodore Roosevelt School, a Cincinnati charter school CPS sued to block from opening. The school building was unused and located in the Fairmount neighborhood, where all CPS schools are in academic emergency, and 80 percent of families are of minority status, and live in poverty.

CPS attempted to enforce a deed restriction prohibiting the use of school buildings previously owned by CPS for use by a charter or private school. The 1851 Center asserted such a restriction is void by Ohio’s public policy in favor of school choice, and cheats taxpayers of sales revenue from the buildings. The court agreed.

“The court’s decision is a landmark ruling in favor of school choice in Ohio and against adversarial school districts who attempt to block alternative schools’ right to exist,” said 1851 Center Executive Director Maurice Thompson. “School districts across the state are now on notice that Ohio law clearly and specifically protects the rights of alternative schools. And serious financial penalties could befall districts who attempt to squelch the rights of these schools.”

The ruling halts CPS’s restrictive practice and opens the district to the loss of hundreds of millions of dollars in funding from the Ohio School Facilities Commission (OSFC). Last week, OSFC member State Rep. Kris Jordan moved to stop state facilities funding to CPS because of its purported violations. Jordan, prompted by the 1851 Center’s legal action against CPS, informed the commission the school district forfeited its statutory right to project funding because of repeated violations of state charter schools provisions. The court’s ruling bolsters Jordan’s assertion. Jordan’s letter to the commission is available here.

“Over $46 million in state revenue has been directed away from Cincinnati Public Schools, and to charter schools, as over 7,000 students have left the Cincinnati Public School System for charters,” said Thompson. “Deed restrictions like the one struck down were devised to stop new charter and private schools from opening in Cincinnati, so CPS could retain students and state funds.”

The 1851 Center’s filings in the case are available here and here. 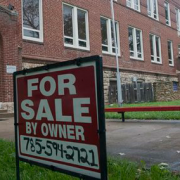