Rep. Jordan’s action is a direct result of the 1851 Center for Constitutional Law’s ongoing litigation against CPS regarding its unfair treatment of charter schools. CPS has prohibited charter schools from purchasing buildings previously owned by the school district, a violation of state law.

“I strongly believe that violations have occurred, and, once again, I urge OSFC to follow the law and withhold CPS-related project funding until these matters are resolved,” wrote Rep. Jordan in a letter to commission director Richard Murray. As a result of the violation, CPS potentially stands to lose hundreds of millions of dollars in state funding. According to CPS’s facilities master plan, posted on its website, the state is contributing about 23 percent of the cost of an ongoing $1 billion school construction project.

“CPS has shown little regard for the laws put in place to protect charter schools from antagonistic school districts,” said Maurice Thompson, executive director of the 1851 Center. “The law clearly stipulates that CPS should lose its facilities funding as a result. Defunding by the School Facilities Commission would send a strong message to school districts unwilling to co-existing with charter schools.”

The 1851 Center is pro bono defending the Theodore Roosevelt School, a Cincinnati charter school CPS is trying to close. CPS is attempting to enforce a deed restriction prohibiting anyone from using any school building ever owned by CPS for a charter or private school. The 1851 Center asserts that such a restriction is void by Ohio’s public policy in favor of school choice, and cheats taxpayers of sales revenue from the buildings.

A copy of Rep. Jordan’s letter is available here.

The 1851 Center’s court filings in the case are available here. 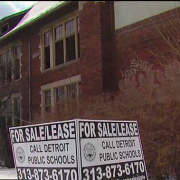