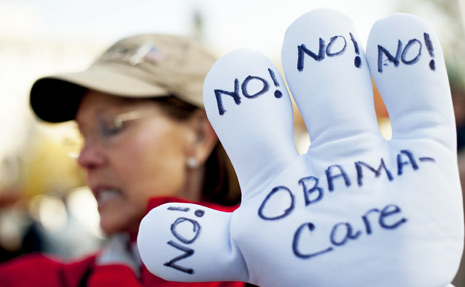 Columbus, OH – On Wednesday March 4, the U.S. Supreme Court will hear its latest challenge to the Affordable Care Act – – this time a challenge to how the President and the IRS are enforcing the law. If that challenge prevails, both the ACA’s employer mandate and tax credits to individuals will be forbidden in Ohio, because Ohio’s Health Care Freedom Amendment prohibits the state from establishing a state exchange.

Should Governor Kasich still move to establish a state based Obamacare exchange, the 1851 Center is prepared to take legal action to stop it.

The lawsuit, King v. Burwell, addresses one of the ACA’s cornerstones: the insurance exchanges created by Obamacare. More specifically, the questions revolves around the IRS’s interpretation of a provision of the law that authorizes tax credits for health insurance purchased through an exchange “established by the state.”

Section 1401 of the ACA offers health-insurance “tax credits” to certain taxpayers who enroll in a qualified health plan “through an Exchange established by the State.”

Pursuant to this Section, Obamacare creates “premium assistance,” taxes credits and subsidies, to offset the costs of health insurance premiums that all agree Obamacare causes. Essentially, these tax credits and subsidies were designed to mask the full extent of outlandish cost increases imposed on health insurance producers and consumers by the Act. However, they also comprise the bulk of the hundreds of billions of dollars in federal spending triggered by Obamacare.

When 36 states chose not to establish their own exchanges, the federal government stepped in and created federally run exchanges in those states. The IRS then extended the tax credits for insurance purchased through the federally run exchanges – an interpretation that directly violates the plain language of the law, and subjects employers in these states to the “employer mandate” – – a $3,000 penalty that is assessed each time one of its employees purchases subsidized health insurance through an exchange.

The challengers argue, quite reasonably, that the statute limits the tax credits and subsidies to state established Exchanges in a manner that is plain and unambiguous, and that the remainder of the ACA and its legislative history are fully consistent with those provisions. The Obama administration responds that the phrase “through an Exchange established by the State” includes federally established exchanges and, alternatively, that the statute is vague enough to allow the executive branch to decide whether (or not) to offer subsidies in federal exchanges.

The challengers have a high likelihood of prevailing, given the Administration’s weak arguments. If they do, insofar as the IRS has sought to provide tax credits for the purchase of health insurance in federally established Exchanges such as Ohio, its actions are contrary to law and must be set aside. This means subsidies for those using the ACA exchange would be unavailable to Ohioans, but also that Ohio employers would not be sanctioned.

A State Based Exchange: Forbidden in Ohio

On February 19, Governor Kasich indicated to Bloomberg that he was “open to” establishing an Ohio-based ACA exchange. Such an exchange would cost Ohioans millions, while spending billions to subsidize purchases of health insurance pursuant to the ACA, and imposing the otherwise-forbidden ACA employer mandate on Ohio employers.

However, with the overwhelming passage of Issue 3 in November of 2011, Ohioans created a likely-insurmountable legal hurdle to state officials implementing Obamacare in Ohio through a state-based ACA exchange.

As the 1851 Center explained in March of 2012, Ohio’s Health Care Freedom Amendment forbids the state from establishing a state-based ACA exchange. Under the Amendment, the state of Ohio may not (1) indirectly compel participation in a health care system; (2) prohibit the purchase or sale of health insurance; or (3) impose a penalty for the sale or purchase of health insurance.

Under implementation of an ACA exchange, the state would be voluntarily using state resources to attempt to do all three. For example:

“operating an Obamacare exchange would violate the state’s constitution . . . In order to operate an exchange, Ohio employees would have to determine eligibility for ObamaCare’s “premium assistance tax credits.” Those tax credits trigger penalties against employers (under the employer mandate) and residents (under the individual mandate). In addition, Ohio employees would have to determine whether employers’ health benefits are “affordable.” A negative determination results in fines against the employer. These are key functions of an exchange. Ergo, if Ohio passes a law establishing an exchange, then that law would violate the state’s constitution by indirectly compelling employers and individual residents to participate in a health care system. That sort of law seems precisely what Section 21 exists to prevent.”

This would also be true in, at minimum, all states with a Health Care Freedom Amendment or Act (including Alabama, Arizona, Georgia, Idaho, Indiana, Kansas, Louisiana, Missouri, Montana, Oklahoma, Tennessee, Utah, and Virginia).

Without State-Based Exchanges in Ohio and Other States: Collapse or Reform

Without state-based exchanges, Obamacare will be significantly more difficult to enforce, dramatically enhancing the probability that the Act will be “re-opened” to debate amendment or repeal.

In the interim, Ohioans who sign up through the federal Obamacare exchange would lose “premium assistance,” a taxpayer-funded subsidy/tax credit to individuals that masks the true increased costs of health insurance premiums imposed by Obamacare. Without tax credits to support the ACA’s inflated insurance costs, there may be some initial disarray for the roughly 234,000 Ohioans who have purchased subsidized health insurance through the federal exchange. (These are Ohioans who are not eligible for Medicaid, with incomes between 100 and 400 percent of the Federal Poverty Level.)

However, this federal spending will be blocked, and the clamor for repeal will be immediate if states refuse to establish exchanges. (This is because Americans would be threatened with experiencing the full effect of the cost increases imposed by Obamacare.)

Further, Ohio employers will be exempt from the damaging employer mandate.

According to 1851 Center Director Maurice Thompson, “Any state that creates an Obamacare exchange is ultimately voluntarily choosing to enforce Obamacare and its mandates and restrictions on freedom of choice, while simultaneously reducing the chance that Obamacare will repealed or rewritten.”

Thompson suggests that legal action would be appropriate to stop the exchange, should Governor Kasich move to establish one, and that the 1851 Center is prepared to take it.